This ad gave me ebola and a millionaire's brain!? 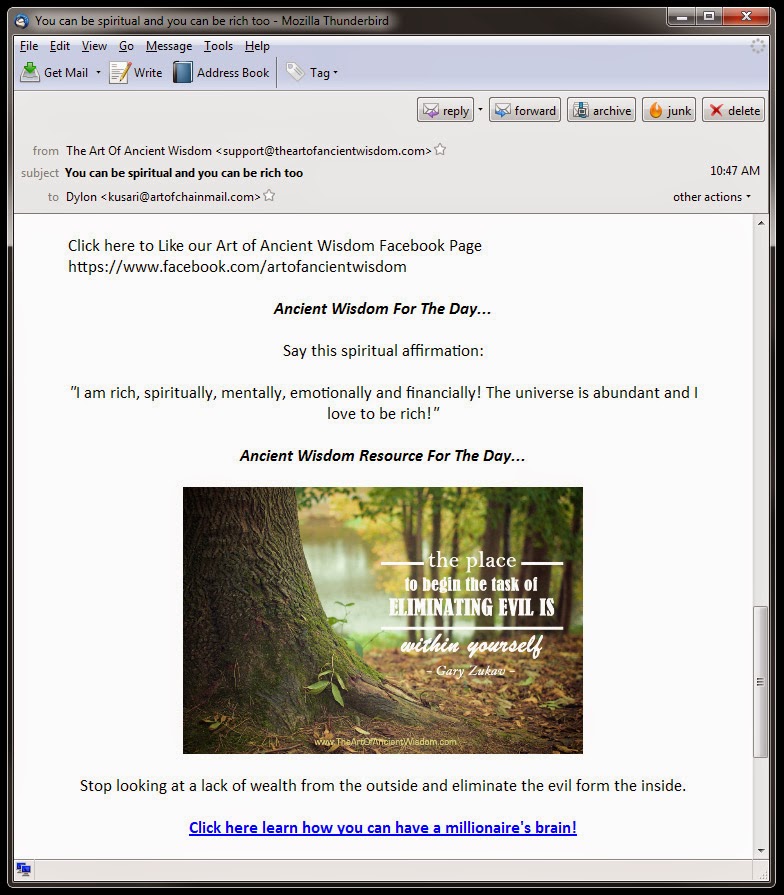 There isn't a better place to learn The Art of Ancient Wisdom than The Art of Ancient Wisdom! A program I like so much that I'm not even posting an affiliate link, so if you would like to ensure that these kinds of affirmasms continue, kindly check out Affirmations - Collected Works of Irony by yours truly, author, actor and artist Dylon Whyte.  Frank, uncommon sense, true gold and mirth all in one artfully constructed digital edition which is literarily music to yours eyes.

Plus, your support helps ensure that future titles, such as Grumbledude's Affirmasms ~ I'm Just Super Sayin' become a reality. Thank you in advance!
Posted by Grumbledude at Monday, March 30, 2015 No comments:

Email ThisBlogThis!Share to TwitterShare to FacebookShare to Pinterest
Labels: a millionaires brain, art of ancient wisdom. affirmations, this ad gave me ebola 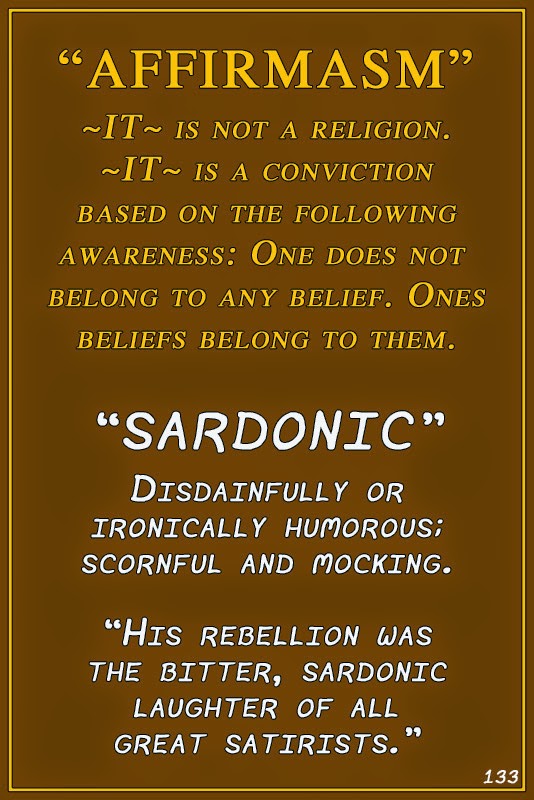 The above quote from page 133 of Affirmations ~ Collected Works of Irony comes via Wordweb, One of my favorite taskbar tools when regular spell checking fails to correctly guess at my literary mess and for the creator's indelible sense of humour. 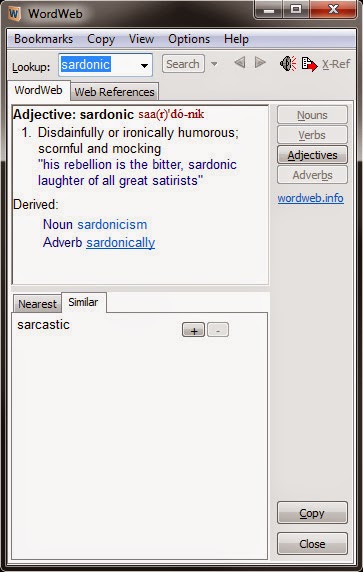 This is funny shit!?

Posted by Grumbledude at Monday, March 30, 2015 No comments:

Case of Haunted Asus T300 Transformer Pad... What would you do?

Posted by Grumbledude at Sunday, March 22, 2015 No comments:

Ever heard the fall of Pink Snow?

Awoke after lake night with fragment of dream where I was literally unable to find a pot to piss in.

Moved on to delicious pancakes and jungle room discussions before heading down to shop for new system installation part 2. This time I won by intimating system into compliance by waving around an extra long USB cable.

More network fun in the valley of the aun where a lovely dual-band Asus repeater is now happily chattering away to an equally spiffy Asus router. Missing 5ghz signal still a mystery for another day. Did manage sustained 5 bar connection for sample of Holy Ghost VS Pendulum & MC GQ - Baptazia part 2 and amazing kawaii puppies courtesy of PhotoGrid. 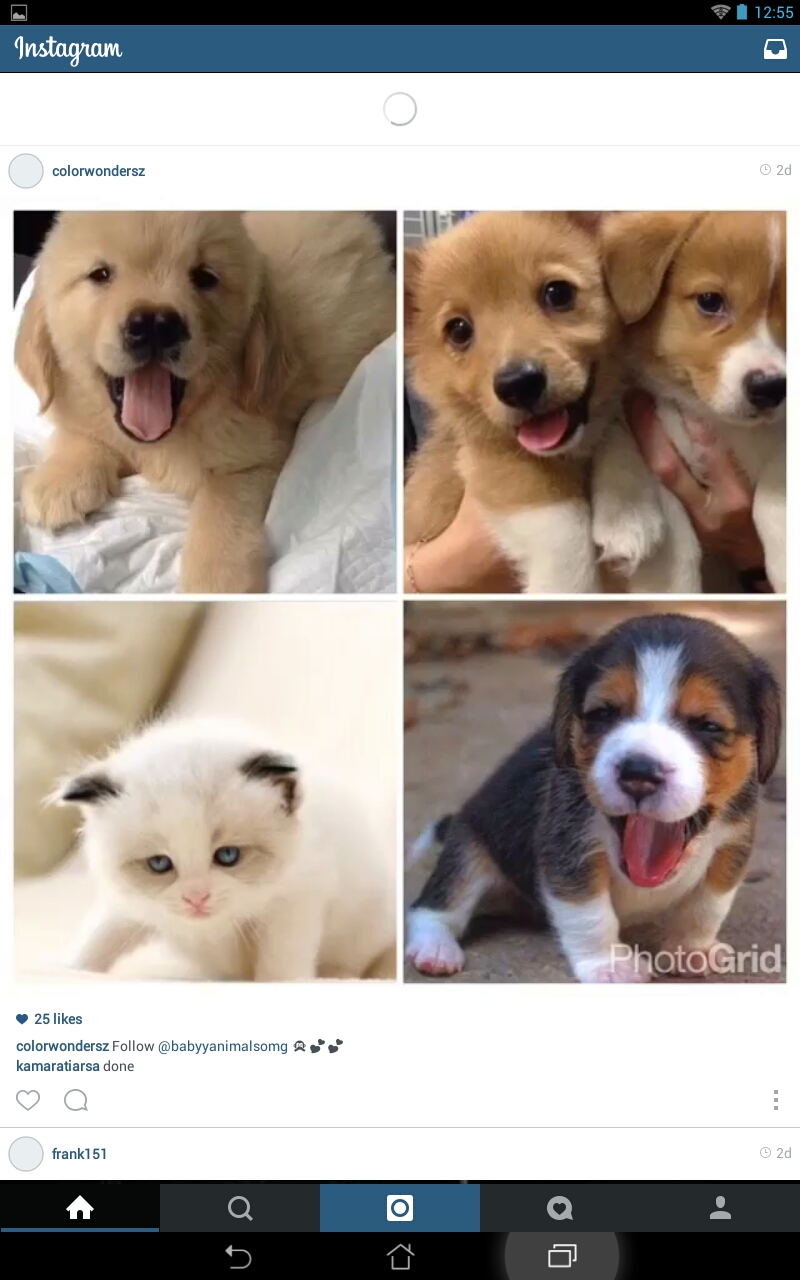 Had an excellent day scrapping booking with a sharp 20 pages composed and an official "yay" for finally blowing past the midway point for project. Retrieved wife from shop with excellent news of first official sale since upgrading with Shopify and for our brand new Pocket Art collection no less, talk about a bonus! 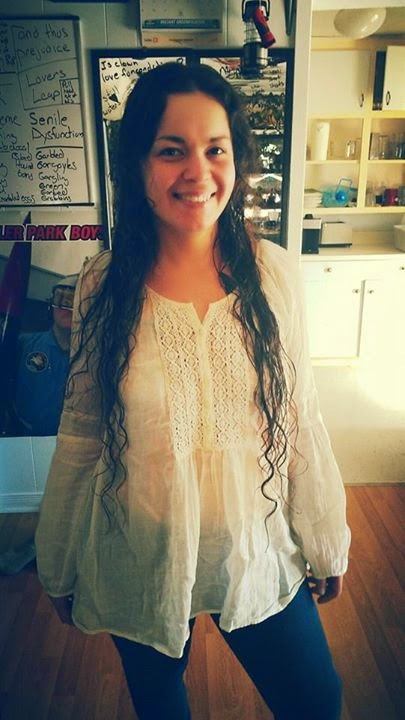 Homemade chicken fingers with panko and crushed corn chips for lunch before a production meeting to finalize more new products. Plus some other R&D materials; the future is looking so bright we're all going to have to wear shades.

Then it was back to pixel pushing for our upcoming Pocket Art series two, check out this cool video for a sneak preview. Plus an original piece of electronica composed by myself and a dearly departed friend with vocals by Booksie (you know who you are.)


Pink Snow is an homage to the early days of home computers. Both my friend and I started with Apple II computers that featured green monochrome monitors. One winter, after a particularly long day staring at the monitor, I looked out the window before supper only to discover that staring at the green for so long had caused the snow to literally glow in my vision with an unearthly pink hue.

Note to self: Begging with the eNovella 419, the Dyl W. Thrillogy continues with "Pink Snow Crash" a special short story containing the story of a scorned model turned cyborg assassin's quest to Kill Dyl in the as-of-yet-unreleased title COCKZILLA! ATOMIC BARNYARD AVENGER!

Glad to have managed a blog post, sad to have no new Chainman product today other than Pink Snow with 300x speed pixel scrubbing in the background for entertainment. Hope you enjoy, Chain on! Dylon
Posted by Grumbledude at Thursday, March 12, 2015 No comments:

Woke up this morning thinking about Salvador Dali and wishing I could feel a similar delight and vigor at awakening myself, Dylon Whyte. Lucid dream drought continues, with only vaguish memories of attempting to remember some esoteric detail during a half-awake early morning pee run. 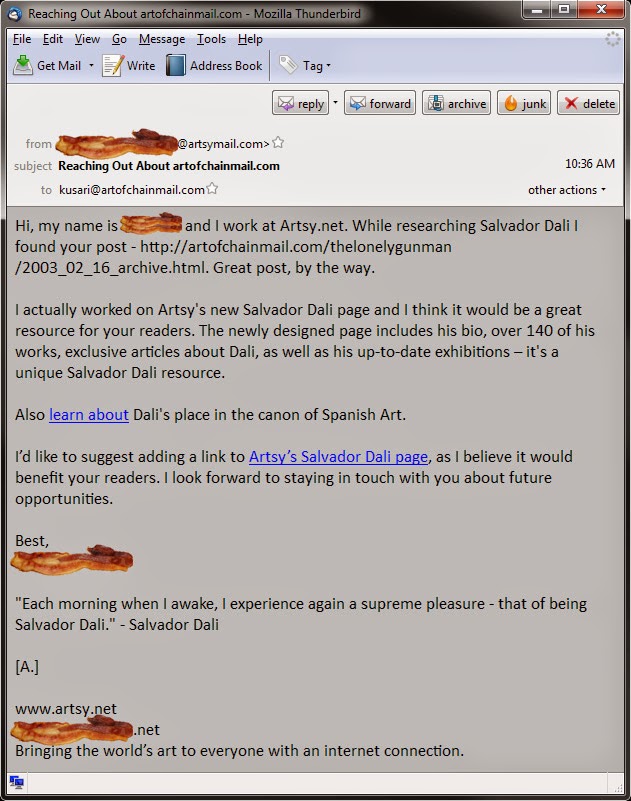 Except completely forgetting to instill a useful Mnemonic, such as the other night's Twerpies trip. 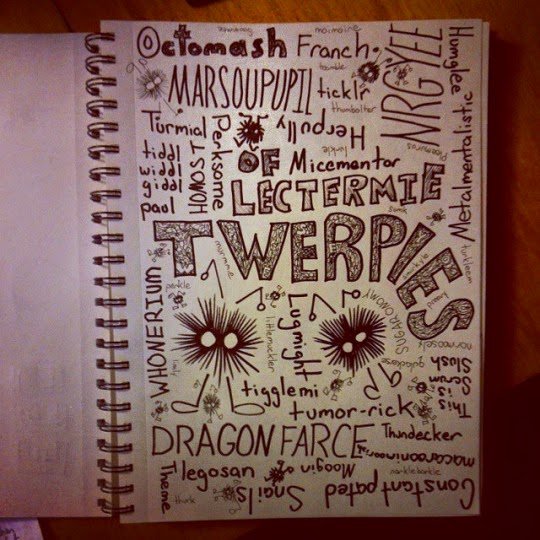 Poked around computer cable storage attempting to find what might be needed for installing new system at shop. Overheard SSDD buzz regarding latest technical blockages in more ways than I really cared to and then started pushing pixels. At some point realize that my current freelance occupation could best be summarized as "turning pixels into dollars."

Talk about emulating idol and KMS poster boy Rumpelstiltskin, well except the gold part. That's not true, as I have more true gold than any person could ever wish for in terms of learning, experience, love, family and the things that truly matter. Unlike currency, which as usual, is always in short supply.

Started day by mounting curtain rod and hanging crystal prisms of all sorts in window. Work was hot and my big feet are not exactly built for the width of standard stepladder steps which were apparently created with Oompa Loompas in mind. 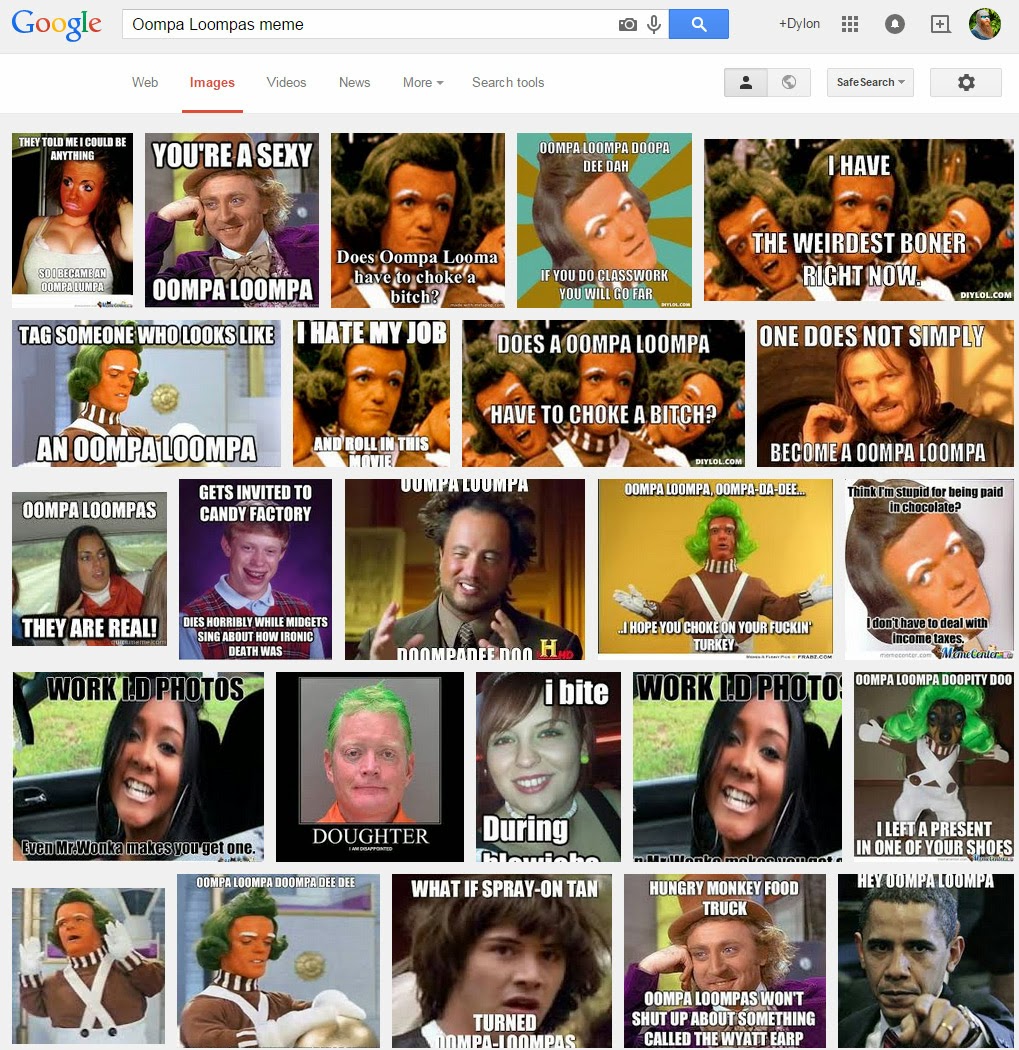 Spring was definitely in the late winter air today And also upon my balding forehead as beads of sweat trickled into partially blinded eyes. Mind was slightly elsewhere, so enjoyed time away from myself with prescribed tasks providing a sense of accomplishment.

After satisfactory prism distribution was achieved came wood stacking from basement hold through trap door as a cool off exercise. Somehow had sense not to bump head on joist, unlike three previous attempts (yay me.) Thought we might finally get to work, but then discovered a triple leak along the central studio beam and had to bail water before getting down to business.

Dad found humour in the thought that Wacom tablet and latest Painter software could not only emulate all the techniques it has taken him a lifetime to accumulate, but also with less mess and overall expense. Although I did have to concede that it's much lest practical for in-the-field painting and sketching. Although I think he got more of a chuckle out of the awful art I created testing our the capabilities of our new store hardware as part of last night's shakedown cruise. 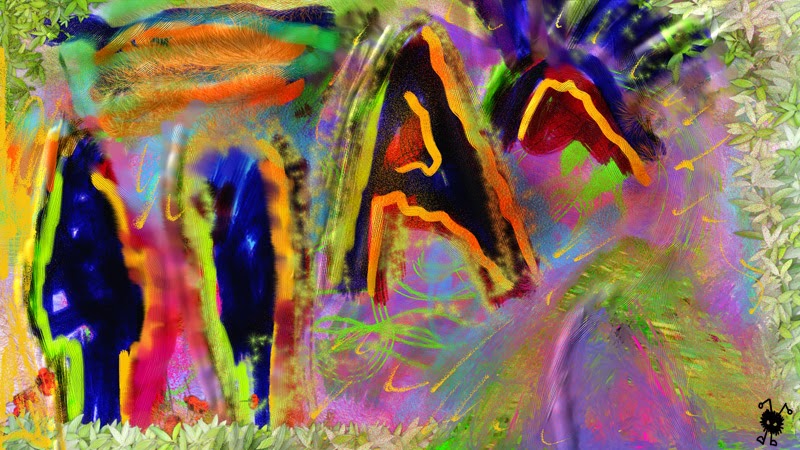 Only managed a single double Scrapbook page and a couple of updates before it was time to pack up and retrieve wife from shop. Arrived to technical news good, bad (expletive bleeped) and indifferent and then arrived home to quenching a literal shit storm of ignorance before finally getting to late supper. 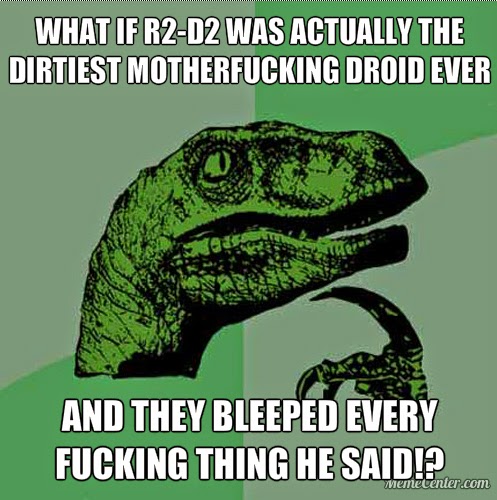 Noticed a few nice pieces on FB Chainmaille and as always found myself wishing that I had more time to share my experiences (plus the organically monetized blog readership to appreciate) before heading back to days second round of pixel pushing. Good news is that results of last months pixel pushing are looking especially flashy in product shots for latest Pocket Art project which is now live and available for pre-order. 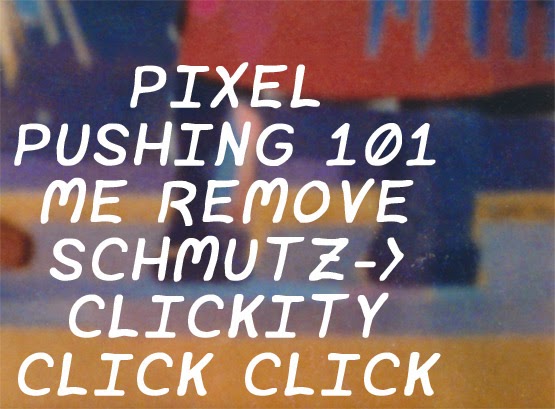 A burden feels lifted from shoulders as we focusing on reaching our services to the world as opposed to trying to attract visitors to what was today became a literal cesspool.

This got me to thinking about the old B.A.S.H. definition or how IT feels like the ignorance of the world continually blows our minds. The idea started after watching a screening of the Stupidity documentary at a friends house.

Stupidity begs the deceptively obvious question of just what is stupidity? Resulting in often comedic, yet deeply philosophical concepts vs. common definitions. Like what is the technical difference between stupid, moronic, idiotic and so on.

The final concluded was that stupidity is the infliction of one's ignorance upon others. As ultimately "we do not know what we do not know" is the most base logic. Whereas stupid motherfuckers don't know that they don't know and thus end up inflicting their ignorance on everyone else. Usually whilst consistently insisting that they know this, that, pish, posh or some other improvable nonsense about existence.

The concept hurts every fiber of my being in more ways than it's possible to count. The most important thing I ever learnt is that I know nothing. Why? It means there's always something new to learn. Can you imagine fate worse than actually knowing everything? I sure can't, yet stupid people revel in the bullshit of their ignorance like blind piglets marching in unison to the Bacon Factory. 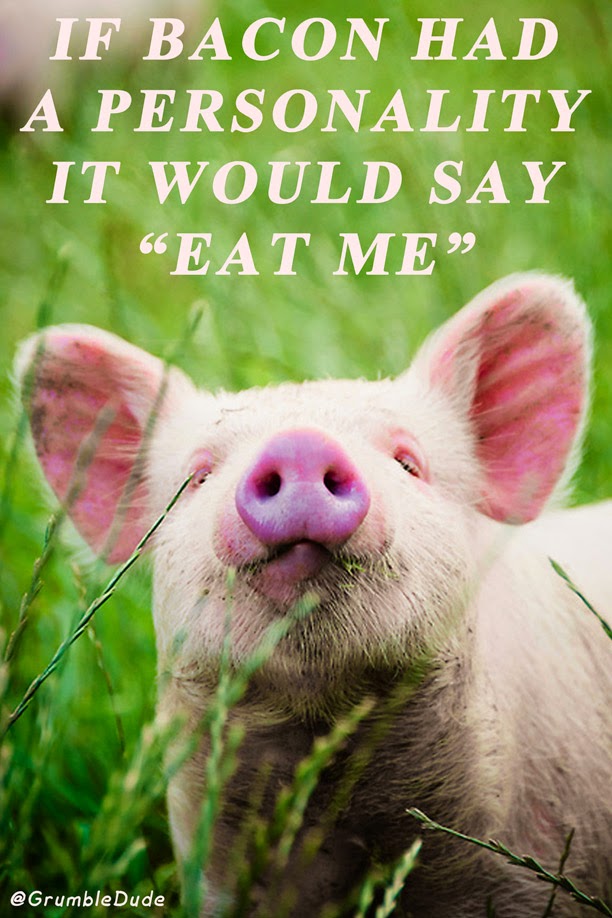 From this perspective B.A.S.H. is derived to represent a metaphorical club or perhaps better the weapon of dullards everywhere. No wonder IT was once observed that one must never argue with an idiot, lest one one be dragged to their level only to be beat with experience.

This is the continual B.S. those of us who actually know better than to ever believe must endure each and every day in the face of society's metaphorical scat fetish fascination with the production and propagation of its ever-so-precious manure. Wholly Shit indeed! Something scandalous in the Buy Bull? Better call The Poop with his extra tall hat to sort IT all out! 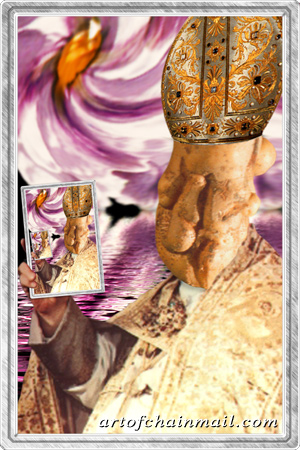 Keep meaning to create a B.A.S.H. O.P., in the memetime here's a crappy daily doodle. Right now it's hard to imagine meeting the goal of creating daily blog posts, but that doesn't mean I'm ever going to top trying. In fact, fuck Yoda, never stop trying and as always, thanks for reading! 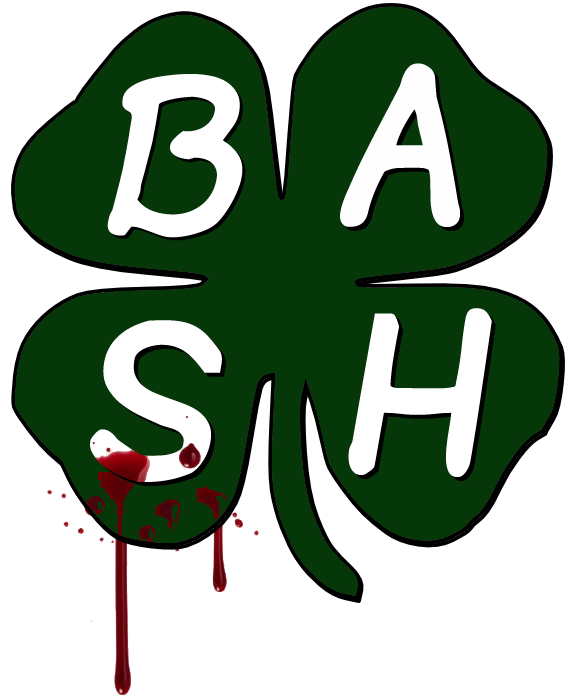 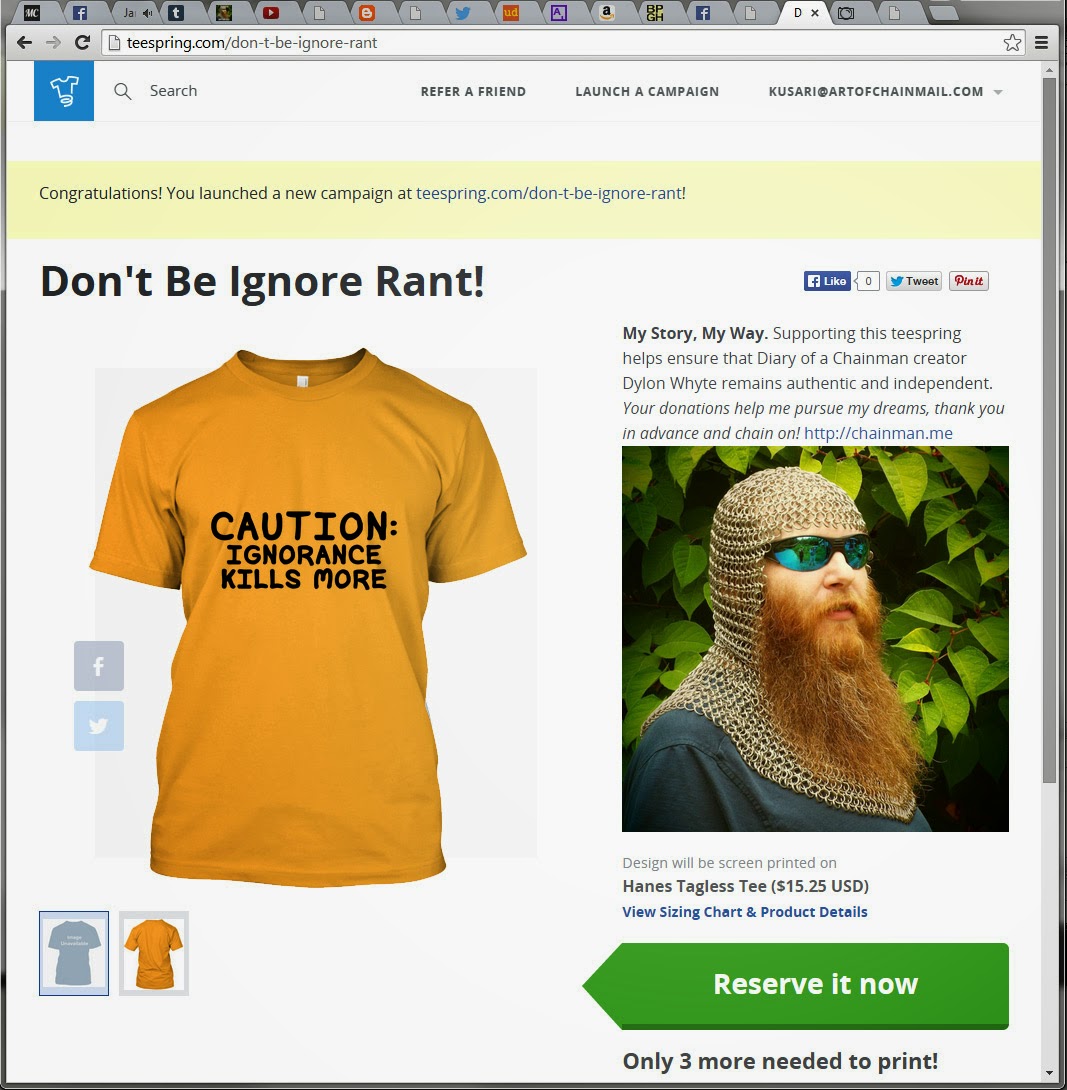 Posted by Grumbledude at Wednesday, March 11, 2015 No comments: 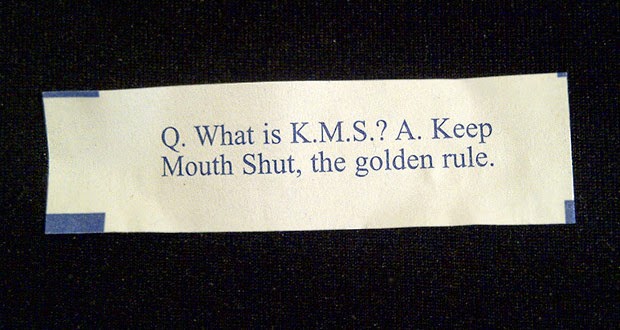 I used to be confused by the idea of the old golden rule from songs like Renaissance by Valdy. Then dad told me about his childhood when it was speak only when spoken too and I adapted my own axiom as STFU; Shut The Fuck Up. The Fuck being the asshole voice in my head that never shuts up, but which I always have the choice of not letting lose on this existence.

"Ninja do not stop to deliver messages, ninjas are the message." Random dialogue from unfinished screenplay involving the ill-fated loved affair between a female ninja and dishonored samurai.

(Note to self: Add WWND? TEE HERE)
Posted by Grumbledude at Wednesday, March 11, 2015 No comments: 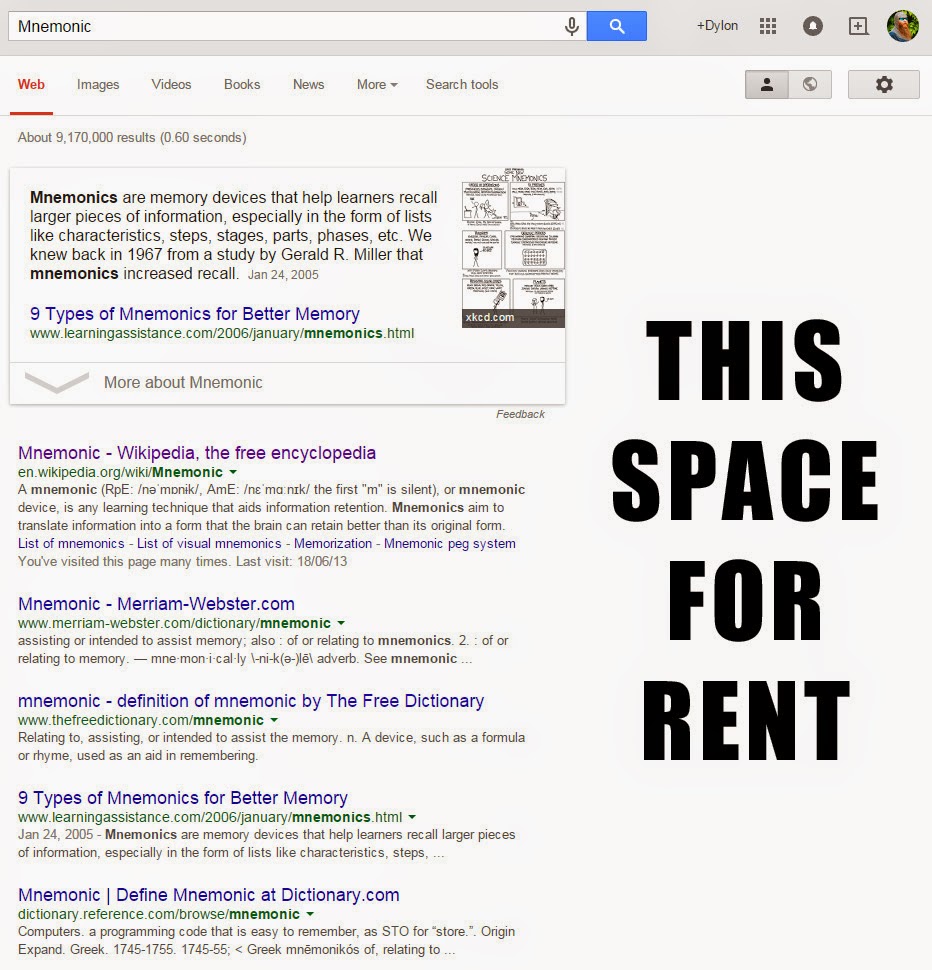 Read More in Burning Chrome by William Gibson, which is way better than the Keanu Reeves theatrical debacle. Also, idea chaining s in Tricks of the Mind by Derren Brown.
Posted by Grumbledude at Wednesday, March 11, 2015 No comments:

Do you remember the first time you surfed the net? 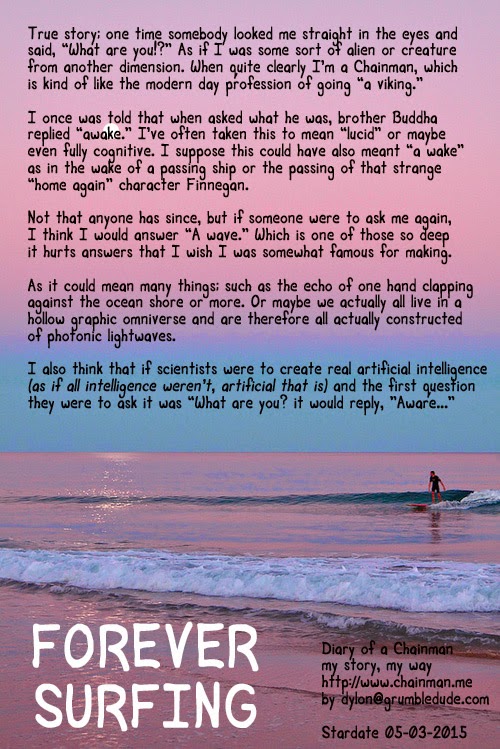 For me it was 1996 and I was instantly hook on the exhilarating freedom of swinging from one hyperlink to the next.
Posted by Grumbledude at Thursday, March 05, 2015 No comments:

Posted by Grumbledude at Sunday, March 01, 2015 No comments: